Many of you have known us for years and know how important it is for Naturando to keep up with scientific developments, regulatory provisions and consumer needs.

It is not always possible. Sometimes, regulatory provisions do not meet consumers’ needs and requirements.

But this is not the case with the new Sinusyl MD!

In fact, due to regulatory obligations (you will have heard about the new European regulation on medical devices), we had to modify our Sinusyl MD and we took the opportunity to investigate the critical issues so as to make it more tolerable for everyone.

Because we like to see the glass half full, taking the positive aspect from the difficulties we encounter; and just what we have done for Sinusyl MD.

Before we see how it was modified, let’s start from a fundamental aspect, the medical indication remained the same, specifically SINUSITIS.

Sinusitis is characterised by an overproduction of mucus causing the typical discomfort associated with the condition itself: stuffy nose, pus secretion, pressure and pain in the nose, as well as being the origin of headaches.

Overproduction of mucus is the respiratory system’s response following contact with bacteria, viruses, pollutants and antigens. The mucus in fact, thanks to its dense consistency, captures everything that is “not self” and eliminates it.

However, if the mucus is excessively dense, it tends to stagnate in the sinuses, causing the discomforts seen above. So what can we do?

Sinusyl MD: with the new formula

Our Sinusyl MD is a medical device, now Is class, whose active ingredients guarantee both the elimination of mucus and the restoration of mucociliary clearance as well as providing emollient, antioxidant and protective effects. 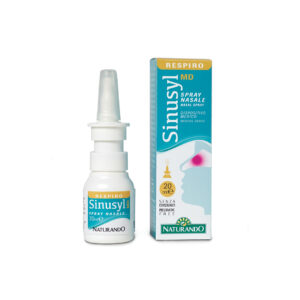 Although our customers loved the previous Sinusyl MD, some complained of excessive dryness of the mucous membranes as a result of its use.

And that’s why the new Sinusyl MD contains hyaluronic acid. The latter, in addition to improving consumer compliance, as it moisturises and lubricates the mucous membranes, also creates a protective film against external agents. Consequently, it limits the exposure of the mucous membranes to what is “non-self” thus avoiding further aggravation.

The other important novelty is to be found in the bottle as the pump contains a filtering membrane that preserves the microbiological quality of the product, in fact, it filters the incoming air at each dispensing.

This feature makes the product usable until the expiry date, without having to resort to the use of synthetic preservatives. This technology is called Advanced Preservative Free.

Not just for sinusitis

The new Sinusyl MD therefore has more indications than the previous one. In fact, it is indicated:

It is the remedy to be recommended not only in the autumn/winter but also in spring since effective for allergic rhinitis.

In addition, the presence of hyaluronic acid makes it suitable for everyone, because it  has an emollient action for the mucous membranes and keeps them hydrated. 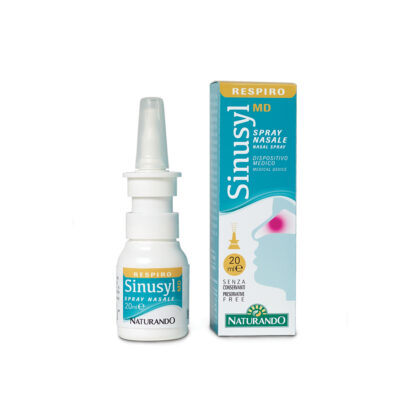